Great news! “Treasure” has been reprinted in the Best Indie Speculative Fiction 2019 anthology from Bards & Sages! As Bards & Sages describes it, “This collection is our annual celebration of the small press and independent publishing community.”

Best Indie Speculative Fiction 2019 features twelve short stories of fantasy, science fiction, and horror that have been published over the past two years, and it came out in November 2019. Currently, it’s available from Amazon here. 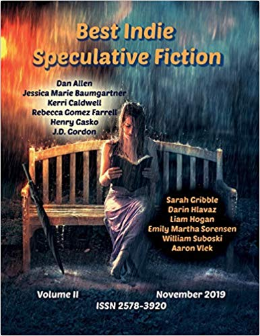 “Treasure,” a fantasy fable, was originally published in the Dark Luminous Wings anthology from Pole to Pole Publishing. Here are the first few lines:

Wind thundered past the slats of the storage cabin. Hidden within a barrel of fish guts, the stowaway braced herself for lurching. But when the ship pitched sharply sternside, Enkid knew it was no ordinary squall. A storm this bad would force the captain out of his quarters despite his usual drunken stupor, creating an opportunity to filch the beveled, green-glass vial he wore around his neck. It held hemlock tincture, a rare poison that would come in handy for someone in Enkid’s line of work.

And here is a photo I took during a Paperhand Puppet Intervention show, which may, or may not have, influenced a certain element of this tale. Enjoy! 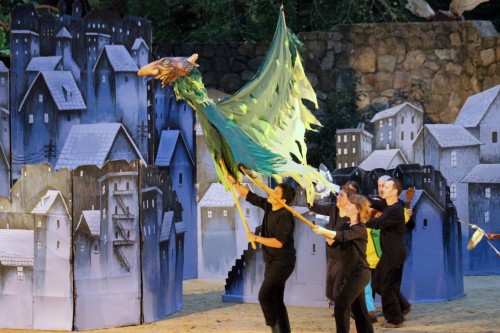 ← Where to Find Me at Worldcon
“What Scattered in the Wind” appears in Accolades! →