“Garbage” appears in Through A Scanner Farkly: The 2017 Fark Fiction Anthology, which was published on July 22, 2017. 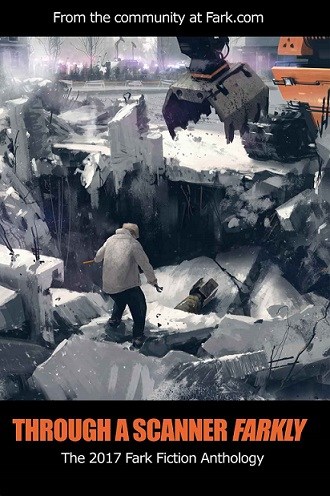 It’s a humorous sci-fi tale about crazy old ladies, immature teenagers, and aliens with an unusual appetite. It also has a fair bit to say about what it means to be native and how that shifts over time and with new waves of immigration. I love it, and it’s been one of my best-received stories at readings.

I have long been a fan of Fark.Com, a news aggregate site that has never lost its edge for irrevant humor over its two decades of internet existence. The proceeds from this annual collection of stories, from the many writers who congregate at Fark’s weekly writers’ thread, will go to St. Jude’s Children’s Hospital.

My next-door neighbor, Mrs. Dobney, had a face like an overripened tomato, seeds about to burst from its stretched-thin skin. That face played a starring role in my nightmares at the age of seventeen—something was always yanking her chain. Too many cholos and senglots around for her liking, Pa had once explained, before smacking my ear and telling me to mind her anyway.

That day, the baseball-sized goiter on Mrs. Dobney’s neck jiggled as she kicked our city-issued trash bin. It was the color of the grass clippings Jaimé “Smells” Kato and I had tossed into it not ten seconds earlier.

“Conner Sanchez,” she railed, “I am sick and tired of this eyesore! It’s a disgrace, keeping your trash out here every day. The H.O.A regulations clearly say—”

And here is an image to stoke your imagination on what to expect next:

“Garbage” is only available on Amazon, but you can choose print or e-book. As already mentioned, this is a charity anthology, and all proceeds benefit the St Jude’s Children Hospital.