I started my Glee column toward the end of the second season, when I finally had to accept I actually really enjoyed the show. I was in denial for the first season because the speed of its plots gave me whiplash, but a certain Warbler and his not-always-certain romance with Kurt Hummel cemented that love.

I don’t write about Glee from a snarky perspective like so many reviewers do — and don’t get me wrong, their columns are hilarious. I, however, accept Glee’s many flaws because it entertains me. My columns are more likely to ponder the themes of an episode and recount the performances and lines that most impressed me any given week. There is also a fair bit of Darren Criss adoration. I make no apologies for that. 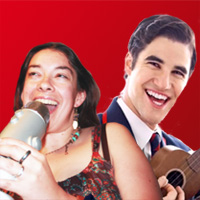 The first header for the Glee-Full Gab.