The Trickster is a personal essay published online by the Independent Weekly in  the summer of 2010. It’s a short reflection on the disappearance and recovery of Loki, our orange tabby cat who went missing for 8 months. Here are the first few lines:

Loki is the Norse god of trickery and mischief. He’s a shape-shifter, and I’m pretty sure our tomcat is one of his chosen forms. We picked out the name Loki before we went to the shelter, and yet it fit him perfectly.

I wanted an orange tabby because I’d always heard they were the friendliest cats. At the shelter, I was drawn to the loudest meower, a runt of a kitten with a deafening purr even from behind cage bars. He was the only orange tabby there. It was fated that we’d take him home, and he worked his charms to ensure it.

He proved to be a mischief maker just like his namesake. He claimed all of Woodcroft as his domain. Loki was well fed and well loved, but he still fooled many unwitting humans into thinking his easy purr and plaintive meows were signs of hunger. The neighborhood became his personal 24-hour buffet.

And here is a picture of our monster from when we first got him back after jaw surgery and an eye occlusion procedure. Poor kitty.

The rest of the Trickster can be found in the online Independent Weekly as part of their annual Dog Days of Summer issue. It appears about halfway down this page. Of course, all this is really an excuse to post a more recent picture of Loki as well. Keep it in mind while you read about the ache when he went missing. All is well now! 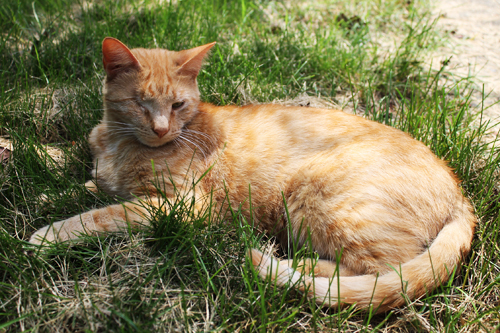