“Blow ‘Em Down” is a fantasy, jazzy, steampunk retelling of the Biblical battle of Jericho. It is published in Issue #131 of Beneath Ceaseless Skies, a special fifth anniversary double issue. 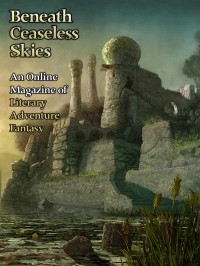 Here’s a small teaser from the beginning:

From our brass band’s vantage point at the Gilgal plains, the glass dome was impenetrable. An immense central copper tube supported it, using a full city block for its foundation and generating energy for the whole town by absorbing the sun rays trapped within the glass. One skygate operated through the top of the dome, opening only to let merchant airships and their escorts in and out. The ships floated by so high, we could barely make out what was seared into their taut material: giant brands bearing profiles of the cityscape. The same image, embossed in a black pattern, circumnavigated the dome’s bottom edge. A single word in bold typeset appeared above each repetition:  Jericho.

You can read “Blow ‘Em Down” a few ways, but the best would be to purchase the issue for only 99 cents at either Amazon (Buy Here) or Weightless Books (Buy Here).

But choosing not to speak through my starving artist bullhorn, I will also say that it’s available for absolutely free from BCS‘s website, right here.