I Wish I Were A Packrat

I Wish I Were A Packrat is a short little essay I published back in the fall of 2009 on the Muffin Blog. It was written as a way to vent my frustration after losing years of creative writing due to a hard drive failure.More importantly, it was an ode to all the characters I lost from the crash. Here’s your lead-in:

I lost six years of my life. Okay, I’m being a tad dramatic. I lost six years’ worth of word processor documents. They’re gone. They left for the great recycling bin icon in the sky and some jerk emptied it. I’m the jerk.

A few years ago, I decided the old college laptop had to go. It had been wacky since my roommate borrowed it for a night of feverish essay typing and spilled a mug of coffee on it. The keys sank down like molasses when you pressed them and came up 1. . . 2 . . .3 seconds later with a loud click. The down arrow key would possess the cursor, sending it on a race down the monitor, which no control-alt-delete combination could halt.

If your interest is peaked, read the rest at the Muffin Blog! And for your visual pleasure, I give you kitten Verdandi expressing the same rage at dirty laundry as I felt when I realized the files were gone forever. 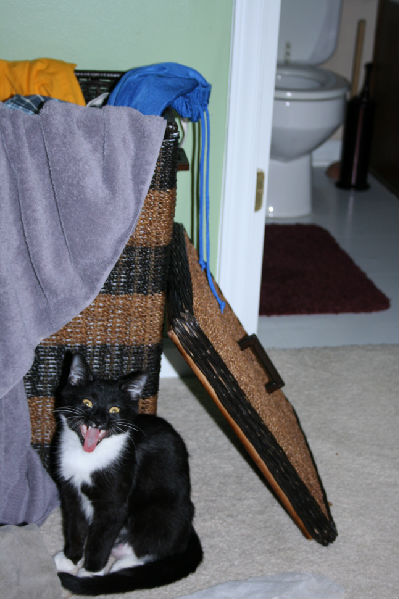