“Good Genes,” a horror novella, is available to read for free at the Future Fire in Issue 2016.38. 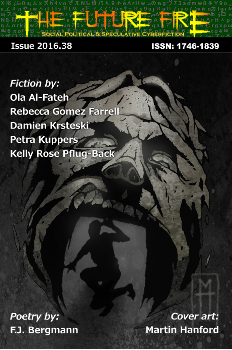 It’s a spooky story that verges on the edge of epic as it combines a modern-day tale with a narrative from the Wild West stage of American history. Sometimes, a place a refuge may bring more horror than the past left behind… 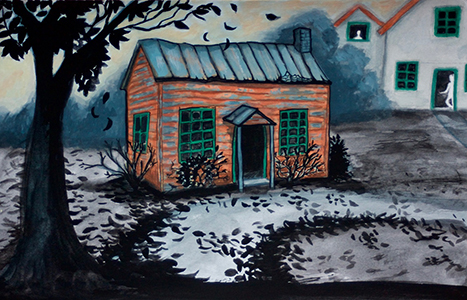 The illustration posted above is one of two that accompany “Good Genes” in the Future Fire. Both are done by Pear Nuallak, and I love when my stories get a pictorial boost!  Here’s the link directly to the story. And here’s a teaser for you:

The noise of the carnival had died down as the ceremonial hour approached and the townspeople made their way to the gathering place in a trickle. Clumps of dry needles covered brittle pine cones hanging from a handful of trees. The great lawn was a patchwork of mud-filled trenches, struggling green grasses, and yellowed squares that had given up the fight. A faded wicker pavilion rose up at the park’s eastern edge, in front of a free-standing wall of cement—handball courts? Two banners strung across the stage declared “Heritage Festival” and “May Our Founders Live Forever.”

Should you read “Good Genes,” try not to take your next next cough too seriously. I’m not trying to give anyone a complex, I swear. 😉