Last night, I dragged my husband with me to the 30 Threads Blogger Bash at the Durham Performing Arts Center (DPAC).  For those of you unfamiliar with 30 Threads, it’s a website run by Ginny Skalski, a journalist based in Raleigh, and exists to help us get the goods on which Triangle area websites and blogs are worth a click.  As a subscriber to the site, I was already planning to attend this bash and take advantage of the chance to meet bloggers whose sites I’ve enjoyed reading and drum up some more readers for my own.  You know, that whole networking thing people talk about.  But then, I actually got a nod on 30 Threads this past week, so I was even more excited to go.  Being profiled is fun!

END_OF_DOCUMENT_TOKEN_TO_BE_REPLACED

The Banjo and Africa

I spent this evening attending a discussion at Duke on banjos and their roots in Africa.  There are three reasons why I chose to attend:

END_OF_DOCUMENT_TOKEN_TO_BE_REPLACED

Snow by any other name.

I hate snow.  Sure, it’s fun to lift your head to the first flakes of the winter but that excitement lasts me for, oh, say a day or two.  Which makes living in North Carolina perfect; in the three years we’ve lived here, this past year was the first one that brought any snow accumulation at all.  And that melted in a day or two, so I really didn’t have time to complain.

END_OF_DOCUMENT_TOKEN_TO_BE_REPLACED

Religion is Making a Televised Comeback.

One thing you should know about me, if you don’t yet, is that I take my television seriously.  Not so seriously that I’ve actually rewatched DVD sets over and over, Buffy the Vampire Slayer’s musical episode excepted, but enough that I spend lots of time reading other people’s opinions on what it all means.  Too much time?  Absolutely.  But being able to watch shows that delve into our inner selves and explore the spiritual questions we all ask is a simple pleasure for me.

END_OF_DOCUMENT_TOKEN_TO_BE_REPLACED

The New Facebook Layout: Tell me why you hate it.

Okay, so it’s been maybe a week since Facebook debuted its new layout.  I, for one, love it but I seem to be in the minority.  Either that, or the haters are just very vocal about it!  So here’s why I love the layout:

END_OF_DOCUMENT_TOKEN_TO_BE_REPLACED

I received the flyer for The Receptionist about 2 months ago and was instantly intrigued by the woman at the desk with pens, phones, and staplers at her command.  I felt a kinship with her as most of my post-college career has been in similar positions.  So I asked Ben, “Can we go?”  He said, “Fine” but qualified it with a loud sigh.  Undeterred, I bought tickets and we went Friday night.

The acting was fantastic.  All the main actors were masters of facial expressions and while I still have no idea why the audience found his opening monologue about fly fishing hilarious, Carl Martin, who played Mr. Raymond, did just fine though he was not quite as appealing as the other three.  Marcia Edmundson, who played the receptionist, Beverly, definitely was the star of the evening.  Her little “hmms” and other noises were essential for conveying the judgmental, yet good-natured character.  She maintained a believable aura of ignorance until the very end, even as she found herself in the harsh light of the central office.

END_OF_DOCUMENT_TOKEN_TO_BE_REPLACED

As I glanced at my kitchen calendar this morning, I noticed I forgot my cousin Daniel’s birthday last week.  Sorry Daniel!  I usually like to send cards to people for their birthdays but have recently found myself settling for leaving messages on a Facebook wall or sending a super poke full of balloons.  If I’m feeling really industrious, I might seek out an e-card with songs and animation.

END_OF_DOCUMENT_TOKEN_TO_BE_REPLACED

Caution, for those not up-to-date with Battlestar Galactica, you may not want to read this.

I’ve been browsing through my copy of Writer’s Market, marking the listings for magazines that might be a good fit for my work so I can research them to find out.  A good number of the magazines that publish fiction stress the importance of well-formed characters.  Of course, any creative writing instructor will tell you that and I have been instructed in a number of techniques for creating characters in the past, mostly doing free writes on their background or conducting an interview with the character in your head.  I’ve even forced groups of junior and upper high schoolers to complete character free writes and questionnaires while prepping for drama group practices back in the day.

END_OF_DOCUMENT_TOKEN_TO_BE_REPLACED

Reyn Bowman, director of the visitor’s bureau for Durham and author of the Bull City Mutterings Blog, posted a piece about the family cemeteries that dot the Durham landscape.  Apparently,  I haven’t been imagining things; there are an awful lot of small cemeteries in this region. 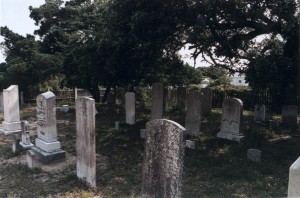 I’ve always been fascinated by graveyards.  I love to spend a quiet afternoon in them, though I rarely do.  The last one I frequented with any regularity was a little Jewish cemetery within walking distance of The Archer House, where I spent my last two years of college.  I don’t remember how I know it was a Jewish cemetery but I do remember that a cat used to jump in and out of the headstones occasionally, which was obviously a big draw for a pet-starved college student.

END_OF_DOCUMENT_TOKEN_TO_BE_REPLACED

I’ve often wondered, while plugging away at a computer under the fluorescent lights of doom, how businesses can be successful and only stay open during the daylight hours. I’ve always thought that most of us consumers are chained inside buildings at work or school from first light until the sun has set. But just while listening at my window this past week, I’ve determined that, strangely, about half of our neighbors are also home during the day.