My regular readers know I don’t actually talk about the craft of writing much on this blog, but it can be fun to participate in the occasional blog hop! So today’s post will be your rare chance to peek into my writing window–heck, it’s the rare chance for me to do the same. I’m not talking about food and drink today, but the world of speculative fiction.

This blog hop is taking place to promote Sucker Literary Vol. III, which looks to be a fun collection of paranormal YA short stories edited by Hannah Goodman.

Per its Goodreads page, it’s “Eleven stories that delve into the depths of our experience—driven by fierce and untouched love that makes us seek, lose, fear, desire, long, reflect, survive, steal, protect, fall, and confess.” You can check out the full summary on that page.

I was invited to participate in this blog hop by a new critique partner, Blanca Florido, who gives great feedback and is sloshing her way through her final round of edits on the first book in her YA fantasy Faerie Tales trilogy. As Blanca wrote me,

She has written three musicals and is currently working on a political thriller. Blanca has written a sci-fi children’s cartoon and is planning a picture book for young children. At one time, she thought that was quite a lot writing to do but has recently become intoxicated with the power of a new software package that keeps track of ideas. Imagine her surprise when she discovered she had no less than seven additional ideas for novels she’d like to write, eight screenplays, two more musicals, three short stories, three TV shows, and a partridge in a pear tree! Exhausted at merely listing them, she’s napping now.

Thanks for the invite, Blanca! You can read her answers to the blog hop questions here. Now to answer those questions on my own writing…

Well, I’m glad you ask, because I’m never quite sure from one minute to the next. I have two novels that I’m fleshing out and writing first drafts for, which takes me quite a long time. One novel is post-apocalyptic, but it’s not about the wastelands we typically associate with such fare. Instead, it follows Eloise, a search-and-rescue agent, as she negotiates life and love through the constant barrage of natural disasters that Earth’s climate has become. The second is a YA novel about a pair of fairytale-monster bounty hunters.

But that’s not all! I always have several short stories running through my head. In addition to a few resting cozily in slush piles at various magazines, I’m nearly done with the most recent versions of Treasure, a fantasy fable, and Good Genes, a modern-day horror story. Of course, I also have one page written on that carnival idea I thought up last month…

2. How does my work differ from others of its genre?

As I’ve had several writing friends tell me recently, so I suppose there must be truth to it, I take a unique perspective on typical speculative fiction plots. For instance, Bother, my urban fantasy short published in Bull Spec, is less about the dragon terrorizing city streets and more about the domestic issues facing a young couple and the futility of fighting when you can’t win. 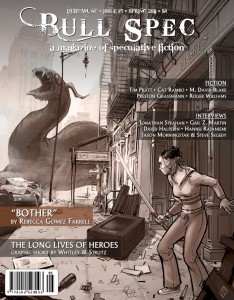 “Bother” made the cover of Bull Spec #5.

Some people love that; others wish there was more dragon.

My horror is more of a throwback to the Twilight Zone style than it is modern-day gore or anti-heroes. I hope my fantasy novel, currently seeking publication, does a good job of injecting social theory and feminism into what could be a traditional quest and chosen-one tale. Well, if the chosen one were actually a chosen three in which one of them had murdered another one’s brother…oh, and they’re being chased by a spiritual menance that can eat people from the inside-out. Did I not mention that part already?

I’ve always been a storyteller–I have the giant, handwritten, marker-colored whale storybook to prove it. 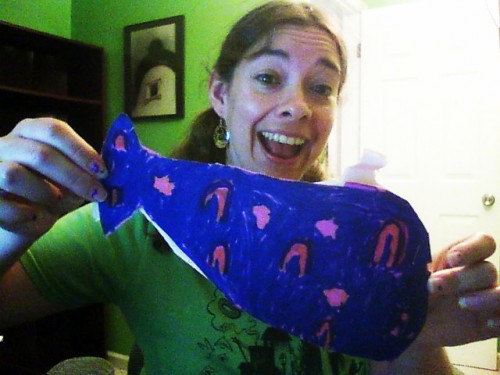 Fantasy captured me young, with C.S. Lewis of course, but even before Narnia, the picture book the Runaway Fairy had my affections. Escapism fiction serves a wonderful, and needed, purpose in our society, and I am happy to contribute to it. I have always thought speculative fiction to be some of the finest writing out there on the human condition. I saw myself in Polly Plummer who looked in the White Witch’s pools and I always will.

I won’t lie, though, I also write speculative fiction because there’s less pressure to get the exact details right–which is why my fantasy is other world, but my science fiction is less about space travel and more about aliens in your own backyard. I hate research. I do it only under duress, by which I mean when the stories refuse to progress without it.

4. How does my writing process work?

Not by listening to music! Learning that other writers often have soundtracks for their work was an interesting discovery for me when I first started doing blog hops to promote my romance novella, Maya’s Vacation. I prefer silence to let my thoughts flow. 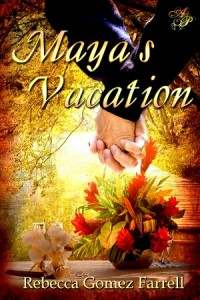 More to the point, however, I am 99% pantser. I try to outline, but I don’t have the whole story in mind when I begin writing. Most of the time, I have images from an actual dream or a lost train of thought that start my process. Often, those images are the beginning, end, or climax of the story, but I don’t know yet how I’ll get to them through plot. I’ll try to get those images down in scene forms, and then I’ll discover my main character–or a few main characters, depending on the story. The character’s journey is far more important to me than the actual plot, which is both my strength and my biggest flaw.

As I write, more ideas for the plot jump to mind, and I keep track of those through handwritten lists, a blackboard, or Word documents, whatever is handiest. Once I have a lot of scenes written, I think about how to connect them in the plot that’s taking shape, and eventually, that’s a whole short story or a book. Or in the case of my novel currently seeking publication, it’s two books I had to cut down to one! I spend a lot of time editing as I go through my first draft, a big no-no that I blatantly ignore, and then do what needs doing to make the next and subsequent drafts strengthened in plot, finesse, action, etc.

It’s not the most efficient writing method, but I don’t know how a story’s going to go until I write it. And god forbid I do any research ahead of time to make it go faster.

Done! I hope my answers have entertained you. Mainly, I realized I haven’t had a vivid dream that inspired a story in a while…but I shouldn’t be complaining. I have too many half-written already!

Next Monday, this blog hop is leaping over to writers Krysten Hager, Margaret S. McGraw, and Katrina Rasbold. Krysten is one of Astraea Press’s newest authors, and I’m happy to welcome her into our fold of clean romance writers. Her YA romance debuts in July. Here’s her biography:

Krysten Lindsay Hager is an author and book addict who has never met a bookstore she didn’t like. She’s worked as a journalist and also writes middle grade, YA, humor essays, and adult fiction. Her debut novel, TRUE COLORS, will be out June 17th from Astraea Press. She is originally from Michigan and has lived in South Dakota, Portugal, and currently resides in Southern Ohio where you can find her reading and writing when she’s not catching up on her favorite shows.

Margaret S. McGraw is a writing critique partner of mine. We may have exchanged a few words–or a few novels’ worth of them–over how to stop head-hopping while I was in Durham. Her bio:

Margaret S. McGraw’s imagination draws on her lifelong love of science fiction, fantasy, and anthropology. Her education and experience range from anthropology and communication through web design and IT management. Margaret lives in North Carolina with her daughter and an array of cats, dogs, Macs, and PCs, and too many unfinished craft projects. Her writing includes a daily blog, several short stories currently in circulation for publication, and two novels in progress: Mira’s Children is a YA science fiction adventure, and OceanSong is a fantasy begun in the NaNoWriMo 2012 challenge.

For more details on her writing and to see her answer these questions on 5/19, visit her daily blog at margaretsmcgraw.blogspot.com.

And finally, Katrina Rasbold is one of the fastest and most engaging writers I know. She’s written over twenty books in the amount of time I’ve written a third of one, so you can bet hearing about her writing process will be interesting! Here’s her bio:

Katrina Rasbold is a prolific writer in many different genres.  She is the author of the popular Seven Sisters of Avalon fiction series, Spiritual Childbirth, Get Your Book Published, Leaving Kentucky in the Broad Daylight, An Insider’s Guide to the General Hospital Fan Club Weekend, several fictional novelettes, and a large number of metaphysical instructional books. Her book Energy Magic held the #1 position in the category of Paganism on Amazon.com for many weeks in 2013 and 2014.

Katrina is a professional life coach with a Ph.D in Religion and a minor in psychology. She is happily married and has six children, to whom she personally gave birth. She lives on a remote mountain top in California with her husband, two of those six children (the rest are grown), three dogs, a turtle named God, several chickens that are all named Helen, and Elvis, a slightly neurotic shih tzu.

You can find Katrina’s blog here.

Can’t wait to see what they have to share!