After the publication of Maya’s Vacation, I took part in the first Feature Friday story for Astraea Press. Feature Friday is a collaboration among a bunch of Astraea Press authors to write an ongoing story with three words as a starting point. Each Friday, a different author tackled the next leg of the story, taking it in whatever direction they wanted to. As you might imagine, my contribution managed to veer the story into the paranormal, just a little bit. The words that prompted us were llama, dating, and waterfall. 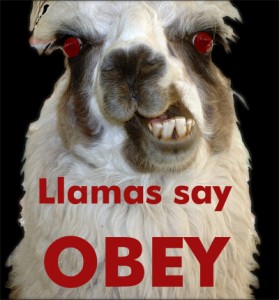 You can start the story from the beginning here, or you can just jump in for my contribution. Here’s your teaser of the story’s beginning, written by Cheryl Grey:

The house looked like half of a bleached orange, placed juicy side down in the shadow of a long, sloping hill. Detective Elleanor Sharpe slammed the door of her rental car, leaned against its hot metal, and kept staring. A geodesic dome, the guy at the gas station had called it as he’d given her directions, his chest thrust out as if proud he’d mastered the term. She’d caught him reading a Scooby Doo comic book, so he hadn’t mastered much else.

Grasslands and cacti faded into the distance in all directions, sliced through by the state road and caliche driveway, punctuated by lazy pump jacks, and weathered, leaning shacks. To the west, looming mesas shimmered in the heat haze. Behind the dome, a flock of sheep hid in the fold of a ravine, the hillside shading them from the afternoon sun. The sky was too dry and washed-out for even the wispiest of clouds.

Here is a snippet from my contribution, the fourth part in a five-part story:

Ellea felt like a vise had cinched her throat. The Natural Assembly was here . . . in Pecos?

Back in Dallas, she’d worked a case on the secretive church and its leader, Reverend Peter Staff. He—it was always a man who led these cults—was in his midfifties with brown hair so gelled a tornado couldn’t move a strand of it. She’d taken an instant disliking to him from the moment she offered her hand in greeting and he held it like a dead fish. The station had called her in to question him after an embezzling charge was leveled against the Natural Assembly by a disgruntled former parishioner. There were also complaints about beheaded chickens, but sacrificing animals was not against the law. Apparently, the church had moved to a smaller pond, perhaps to draw less attention, but they’d also moved on to bigger animals.

You can read the rest of mine here. And because convenience is important to us Americans, here is the entire story together in one post.