My bragging series has finally brought us to the publication of my first book, Maya’s Vacation! 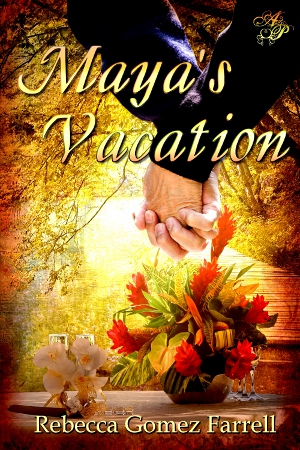 It is a romance novella, reaching just about 50 pages in all, and it was published by Astraea Press in March of last year. The whole process of having a book published was so exciting, from perusing the editor’s suggestions, seeing cover art for the first time, and watching as the reviews come in. Maya’s Vacation is available in e-book only, but you can get it for your kindle, nook, or in basic PDF form — however you want it! Here are the buy links from Astraea Press (direct from the publisher is where I get the biggest cut, hint hint), Amazon, and Barnes and Nobles. The novella will cost you a whopping $1.99. And if that’s too much, I’ll be giving away 5 $0.01 copies in next Thursday’s post!

We’ll be on Maya’s Vacation in the bragging series for a while, because it brought me much to brag about! I plan to repost the recordings of myself reading from the book, highlight a few of the reviews, and highlight a few of the interviews at other author blogs to promote its publication in the next few weeks on Thursdays. For this first post on my book, I’m including an excerpt from it. I hope you find your romantic leanings intrigued!

At 4:45, the three of them made their way out of the cabin. Opal led them on the trail to the dining hall. The smell of sap on the pine trees made Maya smile, and she wondered if anyone had ever made a sap-based paint. It would be dreadfully hard to work with, but the smell would be so much better than oil ones. Dean used to smell of nothing but oil paints and sweat.

It was strange how being here made her think of him when she hadn’t in ages. He had come back those many years ago, but it was a year after she’d accepted her parents’ check, and by then she was already engaged to Chuck with their blessing. Dean had found her at her parents’ home in New Rockford. She didn’t know how he found the house — she’d never mentioned which development they lived in — but she wasn’t surprised when she saw him striding up the walkway, holding a large, polished conch shell that must have been for her. Maya wanted to run to him then, everything within her screamed to go, but she’d made her decision months ago.

She’d wept in her bedroom, behind the curtain sheer, as he rang the bell. Her father opened the door then stepped outside and closed it behind him. Dean’s hopeful expression dissolved into one of shock as she heard her dad say, “. . . engaged . . . her life’s on track now . . .” in an increasingly louder voice. Somehow, Dean knew which room was hers, and she could feel him staring at her window, his blue eyes pleading silently with her through the pulled sheer.

“I came back for you, Maya,” he called out in the voice that used to inspire her to paint the sun cresting over a sand dune. She stood and ran toward the front door but stopped short when she heard her father threaten to call the cops.

Her father came back in a few minutes later and threw the shell in the kitchen trash. Maya wiped away her tears and forced her thoughts toward floral arrangements for the reception. Later, when her parents were asleep, she fished the shell out of the garbage. Painted on its pink lip was a miniature portrait of herself in profile, with a slight smile on her lips. It doesn’t look like me, she had thought, at least not anymore.

“You okay?” Esther whispered as the three women reached the dining hall. It was roughly four times the size of their Downy Woodpecker cabin. “You look pale.”

“I’m fine,” Maya answered, though she felt a little shaky. Odd how thinking of Dean could still affect her after all these years. “I was daydreaming a little. The fresh air feels good, you know?”

Opal opened the door to the Toucan, as the sign above it read. Maya was amazed by the set up inside. She’d been imagining the summer camp cafeterias of her adolescence, long plywood tables and a stainless steel buffet of indiscernible foods in the center of a large, colorless room. This was much more intimate. The left half of the cabin was filled with a cozy, open kitchen, and the other side held a few scattered, high pub tables and a larger table of polished cherry wood that could seat at least ten. The windows were floor length, exposing a view of the tops of pine trees and storm clouds gathering along the mountainous horizon. It was gorgeous. A handful of people stood around, chatting.

“I’d forgotten how lovely that view is!” Esther gushed. Maya nodded in agreement as she watched an older woman in coveralls pull a tray out from the oven and place it to cool on the counter. The woman caught sight of them and clapped her hands together.

“Oh, more guests!” She scuttled over and exclaimed, “Opal and Esther! You both look wonderful.” She gave them each a warm hug. Then she introduced herself to Maya. “I’m Catelyn, Cliff’s wife. We are so excited to have you here.” Her gray hair was in a loose bun. She gestured toward the pub tables. “Please take a seat!”

Opal and Esther sauntered off, and Maya offered to help with dinner. Cooking had been a passion of hers ever since she and Chuck had moved into their first home. Its kitchen was almost completely enclosed, and she had loved how the different spices lingered in it, making her feel like she entered another world every time she stepped inside, one that she wanted to contribute to each day with fresh flavors and experiments. Catelyn set her to pouring flights of wines for the guests, eighteen total counting her and Ranger, though one of the men wasn’t due until tomorrow morning.

“He’s a bit of a strange one,” Catelyn whispered to her. “Just called yesterday, hoping we could squeeze him in and sounding all flustered, too, like he couldn’t explain why he was coming. Now, who would act so weird about coming to a retreat?”

“I don’t know,” Maya laughed. “Sounds like a head case! Guess we’ll see tomorrow, huh?” She recorked the bottle of zinfandel and took a seat at an empty table. Opal was chatting with a skinny man wearing a bowtie the next table over. She gave Maya a wink.

Ranger came in with a few stragglers, a young-looking couple and a short man with a smile so large, it looked like he’d swallowed an orange.

“The wine’s all poured? Well, get out of town,” Ranger exclaimed. “Time to take a seat then, everyone. Let’s get this show on the road.”

By the time she’d finished her slice of mocha cheesecake and drank her port at the end of the meal, Maya had made fast friends with John, the short man. He’d taken the empty barstool next to her and spent the evening charming her with stories about his granddaughter and her new puppy. When he found out Maya was contemplating a reunion with her ex, he let out a low whistle and cried, “That’s a damn shame! If I’d have known that earlier, I wouldn’t have wasted the last two hours on you.”

“Am I the only person who came here to paint?” Maya replied with a laugh.

Consider this a potential glimpse into Catelyn’s kitchen. 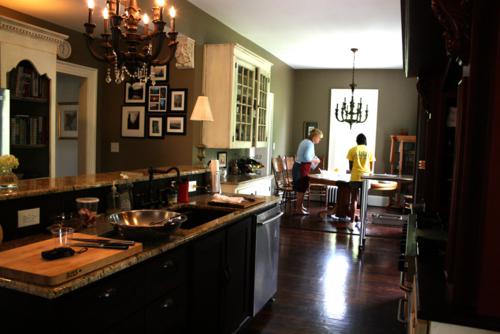